Definition of new luxurious villas In Phuket, It is considered as an important day. In the Thao Thep Krasattri and Thao Si Sunthon’s biography which is recorded and according to local belief that in early Rattanakosin reign, the two heroines gathered local people to defended Thalang which successfully protected from Burmese army, making Thalang became peaceful town until present day. In the past, people are call this battlefield as victory field which now known as Thalang Victory Monument. Architecturally stunning in a history field setting, The Victory is a modernist’s design dream with a breathtaking that blends beautifully with the memory of Phuket’s history. The Victory destination and echoes the beautiful natural landscape. The key visual concept of The Victory is architect and design have completed a two-story dwelling called ” Definition of new luxurious villas ” for an extended who differrent lifestyle in Thailand’s Phuket province. Conceived as a series of units arranged around an open courtyard, the project strikes a delicate balance between privacy and connectivity. 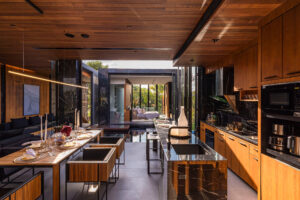